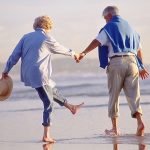 Ryan describes Carrie as the type of women who, through a mix of beauty and sheer presence, turns heads everywhere she goes. And she had that effect on patrons at Café Artigiano when he first met her two years ago.
It was Ryan’s fourth or fifth different date built through Divine Intervention, but this one seemed especially promising.
Until it wasn’t.
“The very next day, she was flying to Milan,” recalls Ryan, with a laugh. “So I thought I had lost her to Italy. You know, Italian men have a certain panache. And three days later, she sent me a photo of her outside the Ferrari factory, her arms and legs wrapped around a statue of the Ferrari horse. I thought, ‘That’s it, I’ll never see her again.’”
But Carrie was only in Italy for a conference. Upon her return, she agreed to get back together with Ryan over lunch. 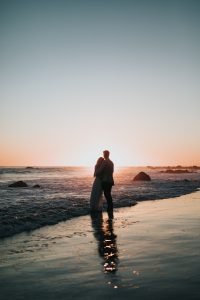 Ryan says he was careful to ensure that Carrie felt safe on this second date by sticking to his checklist of best practices, including meeting in a public place during the day. They lunched at Vancouver’s renowned West – which sadly closed its doors last January after 20 years – and the two discovered they had common interests, several mutual friends, and the same birthdate.
Then Ryan gambled with a suggestion he thought might backfire: Inviting her to his place.
“I learned that Carrie was an interior designer, so I told her I’ve got a problem at in my living room that I didn’t know quite what to do with it,” he says. “So we walked over to my place.”
An interior designer who leans heavily to modern design, Carrie took one look at the place – dark wood, dark window coverings, old English furniture – and thought there was no way she could spend much time with this guy. But she helped him redecorate – Ryan calls it a “Carriefication” – and gave him a chance.
“The advice I’d give to others is not to rush to judgment,” she says. “I’ve met friends who say when they first meet someone, they can tell that nothing’s there. But you can’t necessarily make that call right away. The first time you meet someone, they might be nervous, and you have to give it a chance.”
Carrie says that on her two previous “dates” through Divine Intervention, she recognized there was “no spark”, but continued to see the men and is still friends with both of them today. But Ryan is different, a constant in her life and a potential live-in partner down the road. 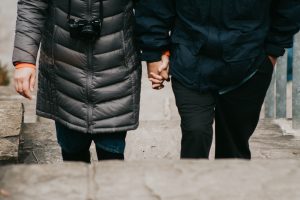 “We haven’t decided to move in together, as we’re being slow about that,” she says. “But we’re really happy with the way things are. We live eight blocks apart, so he spends time at my place, and I spend time at his. We try to spend at least a couple of days not together, but we’re together a lot.”
Susan of Divine Intervention had set the two up because she figured Carrie was a great catch and that she’d appreciate how classy and funny Ryan was. Fine schooling in England stamped him with an old-world charm (he wore a fine suit to that first date at Artigiano) that’s often lacking in the Vancouver singles market.
“Vancouver [dating] has a reputation for having terrible men and wonderful women ,and a disproportionate set of numbers,” says Ryan. “And because of that, I think men just don’t try that hard. I dress properly. I open doors for women.”
And that gentlemanly attitude helped open the door to Carrie’s heart.
“We’re very much in love,” she says.
**Note that names in this story have been changed to protect the privacy of those interviewed**